Some extracts from the history of The Walter Hines Page Chapter of the Daughters of The American Revolution, by kind permission of Laurie Atkins.

Dr James Mennell had treated Colonel Strover for injuries suffered in the First World War. Dr Mennell remained friends with Colonel Strover and was involved with Woodlarks from the earliest days. His American wife, a Titanic survivor, Elisabeth Walton Allen Mennell was Regent of the Chapter from 1928 until 1932. Laurie Atkins has sent a summary of Elisabeth’s life. It seems that she was the first to board the Carpathia, there is more information on her ordeal on the Titanic Passengers’ Website.

The telegram was sent from her home town St. Louis to RMS Carpathia and signed Mennell. It seems to say…

A Girl Guides camp for disabled girls. The chapter’s interest was described as a work toward “human conservation.” It was listed as the “chief project of the chapter” in the 1952 report, and in 1965, it was reported that the chapter gave £10.00.

In 2013, the Chair of Trustees of the Woodlarks Camp Site Trust was Alexine Crawford, the daughter of Lt. Col. Martyn Strover, who founded the camp with his wife Dorothea. She has answered the question as to how the chapter got involved in Woodlarks: Dr. J.B. Mennell, the husband of our second Chapter Regent, Elisabeth Walton Allen Mennell, treated Dr. Strover for a wound sustained during World War I. He continued to assist both Dr. Strover and his wife during the years.

Dr. Mennell later became the President of the Camp Trust, probably after World War II. He laid the foundation stone of a residential home for disabled people at the camp, a building which became known as Mennell House, in 1952. Dr. Mennell was President Emeritus until 1956 and died in 1957.

Mrs. Crawford tells us that Walter Hines Page Chapter gave £10 each year up to 1963, which is the last year a donor list was published. She is unaware of the reason we lost our contact, but would be very pleased if the connection were to be re-established.

In 2015 Woodlarks is still doing the work it has always done, although it is no longer restricted to Girl Guides. More information about Woodlarks is available at http://www.woodlarks.org.uk/

Mrs. William Becker, President General, visited the State Society at the time of the coronation on 12 May 1937 of King George VI and Queen Elizabeth.  During her trip, she visited Woodlarks Camp and planted a tree there in commemoration of her visit. 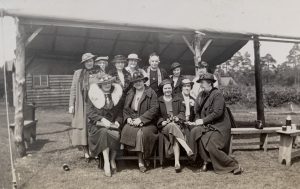